Day 61: Make no mistake, I had begun to lose faith by late last week, feeling the amount I’d committed to do was more than I had time or strength to manage.

But at some point I readied myself for likely plant loss, so that I could inch forward with continuing focus.  The riding mower has packed it in, which means I will likely lose the use of its workhorse trailer as it sits in a repair shop for two weeks. This means I needed to plan for car access so the new trees can be watered with siphon from twenty litre blue “kersene” jugs just acquired at Canadian Tire. I spent hours on the phone and driving silly distances just to track down enough all-purpose (sharp) sand to be able to transplant my carrots: you would think it was rare gems I’d been seeking. I drove fourteen bags of the stuff (surplus) up here with my car shocks groaning. I’ve had to cut both a foot path and separate car trail through woods, and haul the resulting debris to a wood pile, just to be able to access the planned garden location. 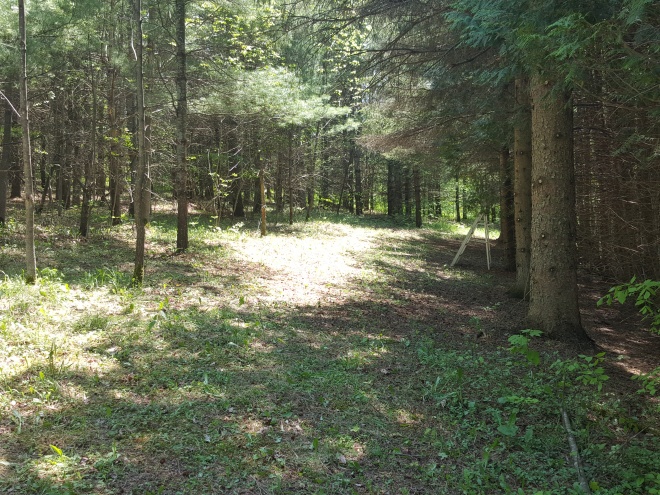 The plans have needed adjustment several times as I realize flaws in the aesthetics or math. The measuring of the field seemed endless, making parallel lines with no visual references seemed unobtainable, and the heat limits how much sun I can work under. 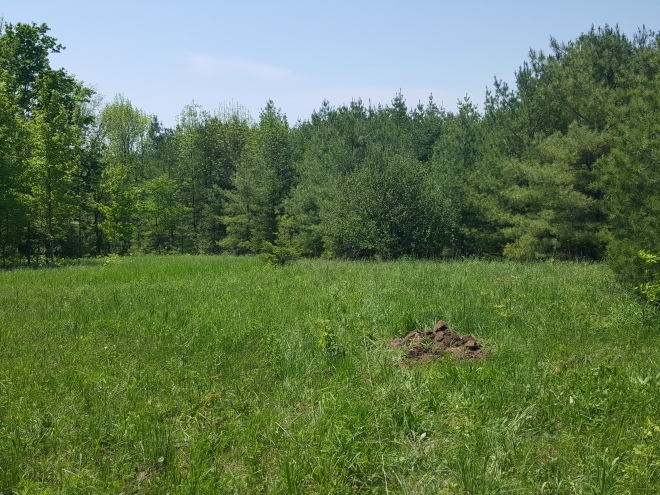 This morning at 9:10am I reached a pivotal moment. The area was staked, double checked, and swiftly then three cherry tree holes were dug waiting for early morning planting tomorrow. The apple tree hole I dug is now a design change, so another will be dug tomorrow. After the snail’s pace things are moving inexorably toward proving what has just been a very brazen dream and theory until now. Two cedars this afternoon were “given room” as rose supports, so four beautiful David Austin roses can go in the ground anytime it’s cool enough to plant again. I may be sitting in a sea of unmown dandelions, but it really feels now as though the bottle has been smashed, this ocean liner has been christened, and it is now set free to the waves.